Sorry, this entry is only available in Czech

TIP member organisations met up after another year on 24 March 2021 to take part in an online talk on the topic of Artificial Intelligence in Industry.

The topic of the talk was Using Artificial Intelligence to Identify Welding Quality and Create a Data Model for Welding. The talk was led by Mr Ivan Vishev, a doctoral student in Data Analysis and Process Development, who works for Daimler AG.

In his doctoral studies, Ivan Vishev focuses on developing algorithms to analyse industrial processes in mass production, assess the repeatability and reproducibility of processes, and digitalisation in manufacturing.

Artificial intelligence helps to automate, accelerate and refine human perception, reasoning and decision-making, and greater efficiency and quality can be achieved by incorporating it into the manufacturing process.

All those who took part were very impressed by the chosen topic and contents of the talk, and the manufacturers amongst TIP members in particular expressed great interest in the technology discussed, something confirmed following the end of the talk, which triggered a lively debate amongst those participating.

We are very glad that we were able again to shine light on another fascinating topic which can be put to use by companies in the Plzeň Region, who can in future apply the findings presented in practice.

We would here like to thank the TIP Chairman, Mr Stephan Kronmüller and Honorary Chairman, Mr Johannes Heidecker, for this truly fascinating talk, of benefit to all TIP members, and we look forward to our next meeting. 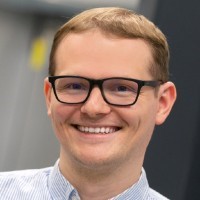 Despite the ongoing non-standard situation in companies, but also in everyday life, 17 member companies Technological Initiative Pilsen, z.s.p.o. they chose their new management by correspondence. This was because at the end of 2020 the mandate of most members of the current Board of Directors of TIP expired. The current chairman, Dr. Mathias Eickhoff, is leaving the management of TIP. Mathias Eickhoff, managing director of ZF Engineering Plzeň s.r.o. is fully dedicated to the rapidly developing technology center of ZF in Pilsen. Johannes Hafner, a long-time member of TIP, managing director in Konplan s.r.o., which is developing a new technological center in the field of beverage technology in Pilsen, is also leaving TIP’s management. Mr. Hafner was assigned new tasks at the headquarters of the parent company Krones AG in Germany.

Let us wish the old-new leadership of TIP a firm hand at the helm of the organization in difficult times. Let us also thank the former chairman and vice-chairman for their efforts and care for the activities in the Technological Initiative Pilsen for many years.

Announcement of the third year of FUTURE FACTORY

Technological Initiative Pilsen supports the third year of the competition called FUTURE FACTORY organized by nvias.org. On January 28, 2020, the announcement of FUTURE FACTORY took place, in which a record 37 teams gradually joined, creating 88 participants from 13 cities from Bohemia and Moravia.

A competition focusing on connecting Minecraft computer games and learning. The competition is about building and programming own factory of the future using so-called command blocks. Subsequently, the team must document their creation using videos and present it to a professional jury.

Congratulations to all participants for a great job. The competition results can be found at nvias.org.

Invitation to the Czech-Bavarian Innovation day

IHK REGENSBURG would like to invite you to the Czech-Bavarian Innovation Day, which takes place on 22.1.2020 from 12 o’clock at the University of West Bohemia in Pilsen.

It is a day full of discussions, lectures and workshops on data science, machine learning and artificial intelligence with experienced lecturers from large companies, as well as SMEs, startups, and science from both sides of the border.

On November 5, 2019, the planned meeting of TIP in Klatovy was held at Rodenstock. Rodenstock met 23 directors of major companies in the Pilsen region. The meeting aimed to invite representatives of public administration and companies from the Klatovy region to the existing members of TIP and share their experiences. The program included a presentation of the Rodenstock group, their production program, and products produced in Klatovy. The presentation, including a tour of the fully automated production of high-quality spectacle lenses in Klatovy, was led by both Managing Directors of Rodenstock – Mr. Dimbath and Mr. Nováček.

Deputy Mayor of Klatovy Croust gave a presentation of the town of Klatovy, including an interesting historical excursion. The present TIP Chairman, Mr. Eickhoff, together with the Secretary-General of TIP Duchek informed about the aims and activities of TIP.

At the end of the meeting Pavel König (nvias.org) spoke about the seminars, courses, and competitions organized by his organization for school youth in the spirit of active support of technical education. After the presentation of the achieved results, Mr. Köenig received well-deserved applause. Finally, Mr. Köenig would like to thank the TIP member firms for the long-term support they have given to nvias.org over the long term and expressed his conviction that the mutual support and cooperation of TIP and nvias.org will continue to develop successfully in the future.

The end of the evening included a guided tour of the Klatovy catacombs and the informal dinner of participants at the famous Klatovy Ennius restaurant.

We would like to thank everyone on behalf of the TIP Board for their participation, organization of the joint meeting and we look forward to seeing you at the next meeting. 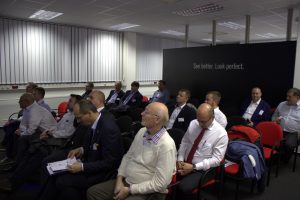 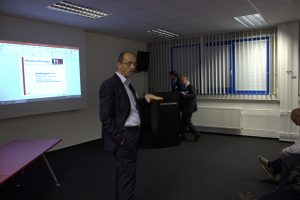 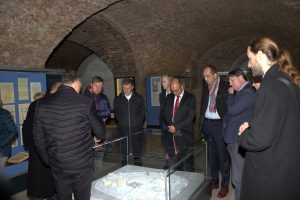 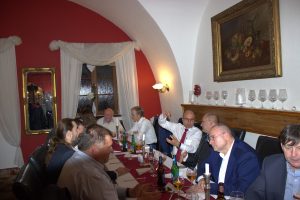 Next TIP meeting on 5th November in Rodenstock Klatovy

On the agenda will be the presentation of the Rodenstock group, especially factory located in Klatovy, producing dioptric lenses. Presentation of the Rodenstock will be presented by Mr. Vaclav Novacek, CEO of the firm. On the programme is also visit to the Rodenstock production plant. The next programme is focused to the networking. TIP board invited local firms from Klatovy region and the deputies of the City of Katovy for common discussion about common problems and potential colaboration fields. That is why a presentations of TIP activities, City of Klatovy strategy, and nvias.org experiences with technical education are on the programme of kids and young people, too. After oficial programme will be common dinner in Klatovy.

We woul like invite members, asociated partners and new potential members to the meeting.

Nvias.org would like to invite you to Informal meetup for schools and companies with the project day Naše firmy.

It’s a unique opportunity to personally experience what is the project day about and how it to develops skills for the 21st century.
Naše firmy is an educational program for entrepreneurship, these are the key competencies for entrepreneurs and corporate intrapreneurs.

The meeting will take place at SIT Port in Cukrovarská 20, Plzeň, on November 26 from 16:00 to 20:00 .
Program:
– discussion about cooperation between schools and companies
– the game Naše firmy/Our companies itself
– evening banquet

There will be career advisors and teachers from elementary and high schools, representatives from city of Pilsen and guests from partner companies.
Registration is here.

Director of  the New Technologies – Research Centre from University Of West Bohemia Mr. Petr Kavalíř, would like to invite TIP members and others who might be interested to attend the 2nd International Symposium on Future Mobility Safety that will take place in Pilsen from 17 – 18 October 2019. This event is organised jointly by the University of West Bohemia,  Tianjin University of Science and Technology, South China University of Technology and the Czech Society of Biomechanics. During the Symposium will be discussed topics like automotive integrated safety, virtual human body modeling, safety systems development and optimization.

Due to the effort of organizers the participation will be free of charge and I believe that Park Hotel Pilsen is a good place to spend some time networking with leaders on future mobility safety from all around the world.

Detail in the attached file:

Poll Sodexo the Employer of the year

May 30th took place a results announcement of the poll “Sodexo the Employer of the year 2019”. The poll evaluated the provided motivation for employees, investments to an education, economic indicators and results. This year the poll put insistence to a digitisation and an automation. Among the competitors, 3 member companies of the Technology Initiative Pilsen broke into. In a category to 5000 employees, MBtech Bohemia s.r.o. has won on the second place, in the category to 500 employees has triumphed ZF Engineering Plzeň, s.r.o., and the third place has taken Konplan, s.r.o. We congratulate to our members for the results and believe that they will succeed in the coming years.